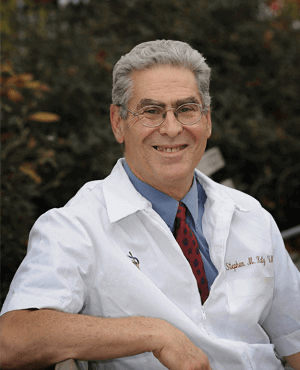 General practioner and owner Stephen M. Katz has worked with animals since 1972. One of his first experiences working with pets was helping to capture and save a 23-foot-long reticulated python that had escaped from its cage at the National Zoo in Washington, D.C. Since then, Dr. Katz has mapped sea turtle nesting beaches in French Guiana and the Galapagos Islands, and was the assistant director of the Hai Bar Biblical Wildlife Preserve in Israel.

A graduate of Cornell University and the University of Pennsylvania, Dr. Katz is a native of Jericho, N.Y., and has been practicing veterinary medicine since 1984. He opened Bronx Veterinary Center in 1995 and is professionally interested in dermatology and the science of allergies.

Dr. Katz and his wife, Nicole—the practice manager of Bronx Veterinary Center—have four daughters: Ariella, Sydney, Skylar, and Shira. Sydney and Skylar both practice taekwondo and Shira loves to dance. Ariella recently graduated from college and all four are huge animal lovers. The family has a dog named Molly, a cat named Puck, and two rats named Diamond and Ruby. In his spare time, Dr. Katz is a triathon competitor and enjoys hiking, kayaking, and studying world and American history.